Shoot! I had 2 drafts going at once and published the wrong one! I don’t know if I can ‘unpublish’ something without actually deleting it, so here it stays. . . . . minus proper editing. Argh. I can’t be bothered now 🙂

Composting with worms. I’ve intended to do this for years. Although I’ve buried plant-based kitchen scraps in my garden for a while now, I’ve neglected to specifically compost with worms. As an organic gardener, I’m very interested in how I can feed and nurture my veggies. Naturally. Synthetic, cancer-causing chemicals are not welcome in my body, in my food or in my home. They can stay away from my yard, and all the critters that reside here, too!

We live in a world full of chemicals used to kill fungus, bacteria, insects, plant diseases, snails, slugs, as well as undesirable plants or “weeds”. Oftentimes, these chemicals kill indiscriminately, much like antibiotics destroy bad bacteria along with the good! It’s why we’re seeing a decline in bees and monarch butterflies, to only name two. We should be protecting and caring for all of the beneficial insects because without them, healthy soil and rain/water, the human race would quite possibly die. Our food supply depends on these three basic things, along with farmers of course.

Since I’m also a vegan, I’ve rejected the standard animal manures many people use. Biosolids? NEV. ER. I’m OKAY with worms though. I’m super vigilant when I’m raking up yard debris like leaves and branches or when I’m moving heavy items such as firewood, rocks or lumber. If I see a worm, I must pick it up! And save it.

A sure sign of tip-top soil is the presence of worms. And let me tell you, I have worms! It thrills me to no end, when I turn my shovel, and see their wonderful, squiggly bodies. Weird perhaps, lol, but I can handle that category. I think I covered it last year when I wrote about my toads 🙂

And speaking of toads, I found my first one yesterday! I was wondering if they were out yet and now I have my answer. He (or she, I can’t tell, nor do I care) was under an old board in my main garden bed. I was looking for worms, not expecting a toad. I took a QUICK pic and left it be. Toads in the garden is a good thing! Although now I have to be careful walking around my yard at night, when I let the dogs out to do their business. 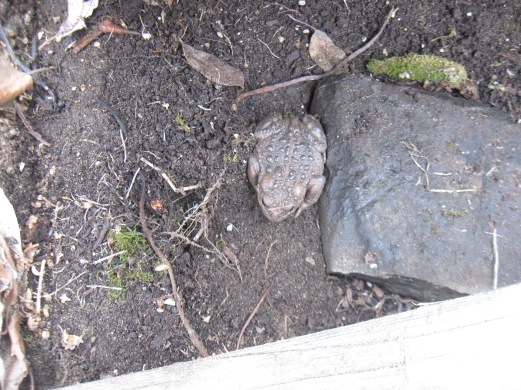 I did some preliminary research 2 nights ago, and much more yesterday morning, because I’m anxious to finally get at it! This business of vermicomposting. I learned very quickly there are two main types of worms; earthworms (commonly called night crawlers) and redworms.

They’re each valuable but have different tasks in our garden. 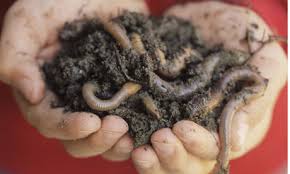 Earthworms, aptly named, are responsible for ‘moving earth’. They do a lot of mixing and aerating, traveling deeper than redworms, taking organic material with them. They’re not suited for composting as they need to burrow through soil to eat and survive.

Redworms, however, are designed for consuming kitchen scraps and yard waste. They have voracious appetites and will make short work of the food you provide them. They migrate upwards, towards food placed above them.

In return, they’ll multiply and give you lots of poop! The more civilized term would be castings 🙂

To be honest, I resist the idea of having to buy worms. I try to use what I already have these days. It fits well with my anti-buying mentality. I’m an eco-friendly person and want to tread as lightly as possible upon this planet. I KNOW. Buying worms would not be a huge deal considering what I’d be doing with them. But still. I’m stubborn.

During my perusal of the many different websites offering advice on how to layer a worm bin, I discovered the plethora of materials used. Broken bricks, pebbles, leaves, shredded newspaper, grass clippings, cardboard. All of these, and more, can have a function in your worm bin. Personally, because I’m an organics freak, I dislike the notion of cardboard and newspaper, which can and do have ink on them. I wouldn’t eat a piece of newspaper, so I’m not going to feed it to my worms either. I use organic sugar when I make hummingbird food and organic nuts and seeds when I make suet for my chickadees and woodpeckers. It would be otherwise hypocritical to me. I don’t want to harm myself with conventional foods but will potentially endanger the teeny, tiny bodies of the birds with it? No way, José. It’s why my dogs eat well also 🙂

In regards to this worm bin, I decided I was going to employ creativity instead. I have the space and the time to adapt and conjure up my own version. For those of you who are confined to utilizing an actual, store-bought contraption, you’ll obviously require a purchase of worms.

Me, I’m making an open worm bin, from wood. NO plastic for this plastic-hater! I’ll designate an area in my yard and measure off a 3′ x 4′ section. I’ll dig down a full 6-12 inches and then begin constructing the sides. I believe 3′ will be deep enough, with the option to go higher if necessary. OR I’ll make an off-the-ground bin with a tray below. It’s an as-I-go project. And I’m known to change my mind.

I’ll do layers like I’m supposed to but ONLY with organic materials gathered from around my yard. Leaves, dead grass, broken up pieces of bark, etc. I also have organic eggshells and organic coffee grounds. I think I’ll be pretty pleased with the outcome.

In the meantime, because I couldn’t wait, I concocted a smaller model directly in my main garden bed. Maybe it’ll work, maybe it won’t. It didn’t cost me anything and the worms are free to wander, if they so choose. It’s an experiment.

I had an old, wooden drawer missing the bottom. I nestled it snugly in a corner of my garden bed. I layered dead grass, dead leaves, an organic potting soil blend with includes peat moss and dirt. I put in some worms, not a huge amount, just what I could readily find. More dirt. Leaves only this time and then my (previously frozen) kitchen scraps (celery, spinach, carrots mostly) and some crushed eggshells. I have SO MANY saved from when I wasn’t a vegan. Now I can put them to use. More dirt and leaves on top of the food and more worms! Covered by more dirt and then finally some large, super thick pieces of bark.

I did all of this while it was cloudy. Worms can dry out very fast when the sun is shining. It’s also why I dig in the garden, preparing it for planting, when it’s overcast. A light, rainy day is even better!

I watered each level as I went, not too much but enough I hope! And as mentioned, if the worms don’t like it, they can leave. MY EPD was near by as usual, with her EPB. (that would be my Ever Present Dog with her Ever Present Ball, lol). I also call her Charlotte. 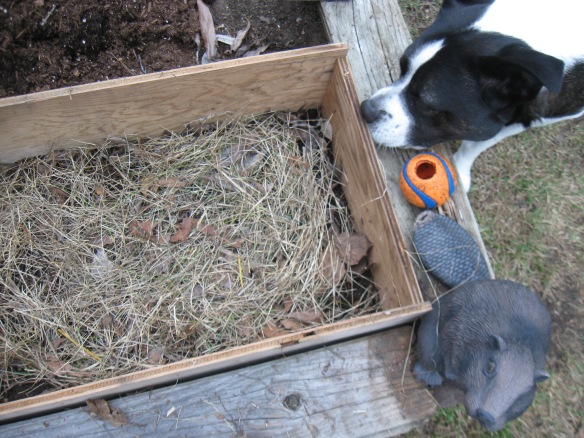 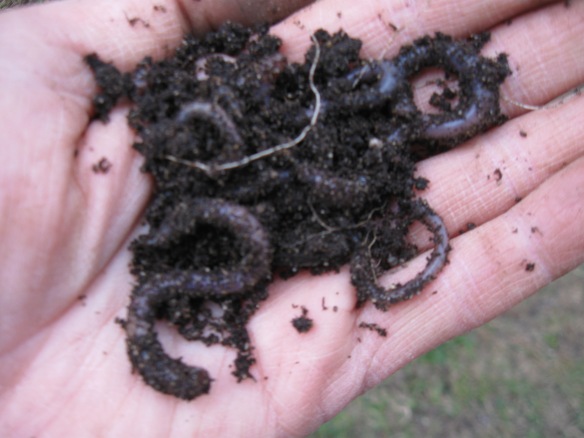 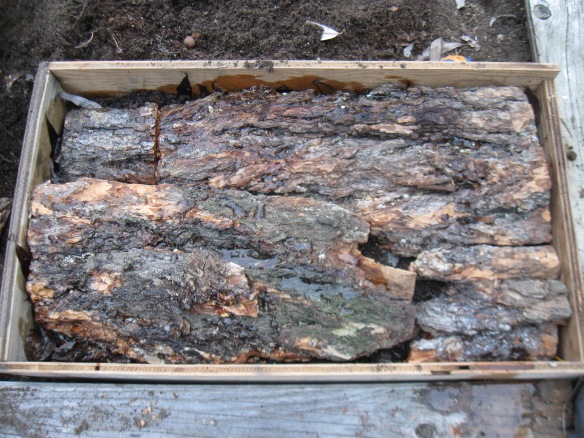 I figured, half way through the process, it made sense to have worms above the kitchen scraps, as opposed to below when using redworms. If earthworms travel down, they’ll encounter the food, and hopefully stay to eat. And then they can go elsewhere, they’re not trapped in a plastic bin. The most difficult thing for me will be leaving it alone! I already want to see WHERE the worms are. Are they eating? Are they gone? What are they doing?!

There are several key things one should know when composting with worms:

I’ll keep you posted on the success, or failure, of my worm composting adventures. And if it’s something you’re keen to try, it’s easy enough to Google ‘how to compost with worms’.

You gotta love the internet. AND worms!

Okay, I did include one link, the information on this particular site was exceptional. Like any subject I’ve researched, I’ve learned how scattered important details can be. It’s not often I find one written piece that covers a lot of ground.